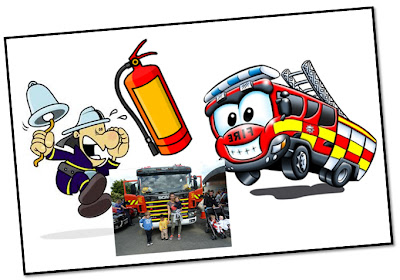 On Monday at playgroup the fire engine came for the kids to get into.  All the fire men first sat down with the kids and adults and talked about fire safety asking questions to children who are under 3 years old, they had no idea what was being asked.  So they started speaking to the parents about how to be safe at home, well the kids lost concentration and you couldn't hear what they were saying, but they keep talking, and talking.

Finally the kids got to climb into the fire engine, but the 3 children I had were all scared and one was crying, and the boys were pulling my arm to get away from it.  I managed to stand in front for a quick photo.
The other week at music the fire engine came also and they were giving the children stickers, but the fire men told me he couldn't
put the stickers on the childs front and we had to, just in case they had a complaint.  I couldn't believe it, how sad.

So over the last few weeks the fire engine has come to playgroup and music, I think its great they do this for the children and help educate parents about fire safety.

Keep up dated with any new info and vacant spaces available